Dean of Faculty of Integrated Communication Sciences at GIJ, Dr. Modestus Fosu has revealed that Fafaa FM through collaborative journalism, has intervened in over 400 cases of persons under spiritual attacks.

Dr. Fosu made the revelation while speaking at the maiden inter faculty research seminar held on February 18, 2022, under the auspices of the Directorate of Research Innovation and Development (DRID), on the theme: “BLAZING THE TRAIL: Collaborative Journalism for intervention; The Case of Fafaa FM in Dzodze, Ghana.”

He said, he undertook the study “to ascertain what I have in my mind about the type of journalism and programming practiced at Fafaa FM” describing it as “a unique one to the practice of media in Ghana.”

According to Dr. Fosu “the study was not predetermined, the idea dropped out of the blue while I was on data collection expedition for a paper on ethic journalism, which explored the possibility of ethnic media and journalism in Ghana.”

He indicated that Fafaa FM exhibited tendencies in its ideologies and journalism practices that reflected ethnic media and journalism. He however noted that, whether Fafa FMs practice through its programme “Duamenefa” could be described emphatically as ethic journalism or community radio was “unanswered in our study”, hence, the need to undertake a follow-up study “taking into consideration audience perspective”.

The CEO, according to Dr. Fosu, indicated that the station took the challenge to provide spiritual freedom to victims through its intervention ‘Duamenefa’ due to the silence of the law on dealing with spiritual matters. He said the programme was adopted to help “rescue vulnerable people of the station’s catchment area from spiritual manipulations and oppression afflicted on them by some native doctors and spiritual men and women in the community, which we believe trampled upon the basic rights of the victims.” 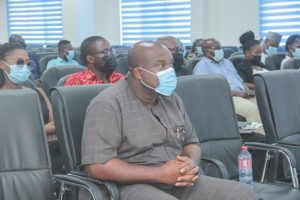 While acknowledging the good work done on the research, Vice Rector of the Ghana Institute of journalism Dr. Eric Opoku Mensah has called for some level of regulation of the new form of practice emerging.

Dr. Opoku Mensah was of the view that, the new form of collaborative journalism must be tested with existing media laws and ethics to know if it falls within.

“Since this is a new thing coming up, I am particularly concerned about the rhetoric and the theories behind it, and if the practice falls within the accepted ethical practices. If we realize there are some lapses, then, as others are suggesting, we need to see how we can put some standards together to guide it, while it is adopted by other media houses so that it does not become a problem.”

Meanwhile, Dr. Fosu has promised to revisit the major concerns raised and address them appropriately in his finally piece before publication.