The Ghana Institute of Journalism (GIJ) in partnership with the Directorate of Research, Innovation and Development (DRID) at GIJ organized a public forum assessing social media protest and the freedom of journalistic functions in the country.

The first part of the forum deliberated on the platform Ghanaians are using for the “Fix the Country” campaign. On the topic, the Guest speakers for the forum expressed their views on the digital platform Ghanaians used to channel their grievances and if it is going to bring changes.

Dr. Ike Tandoh is a Lecturer at GIJ and a Brand Communication Specialist and for him, there is nothing wrong with the platform in which Ghanaians chose for the protest. He said, the whole fiber and structure of communication is changing from traditional communication to New media and thus social media and for that Ghanaians had no other way but to challenge the situation at hand on social media.

He further stated, even if Ghanaians engaged in face-to-face protest, it would still have landed on the various social media platforms so they starting it on social media was not a wrong move but the right thing.

The next speaker Paulina Kuranchie, who is a Doctoral Researcher, Communications Consultant and a Lecturer at GIJ also affirm with Ike Tandoh that Ghanaians engaging in digital campaign or protest is a great step from the offline protest we normally engage in. She disclosed that, in 2015, Occupy Ghana adopted online demonstration and they had a lot of mobilization on Facebook and the outcome was a success therefore, for her it is a right channel to engage. She again engaged the conversation from the Public relation (PR) perspective and said, social media has become a listening tool and for a government, it must listen to the citizens when they communicate via social media.  Paulina ended her delivery by saying, we can no longer rely on face-to-face mobilization due to factors like Covid-19 and also, government or the authorities have various sources on social media that monitor the activities and issues of the citizens and hence online protest is the deal.

On the other hand, Dr. Rauf Arif, an assistant Professor at Texas Technical University and a Social Movement for Change and Social Media Expert expressed his opinions on the effectiveness of online social movements and cited examples from countries like Tunisia, Egypt, Sudan, Algeria and Morocco. In Ghana’s perspective, he said, “if little over 15million people are using the internet and the internet penetration rate is 15percent then it means in the next years to come, the number will double up therefore the chances of digital social movement involving political discourse will be high and get wider audience”. Dr. Rauf further said, the country is likely to experience a bigger political change which may or may not be a political change of a political party however the social status of the country and this statement was based on the metrics and elements gathered around this “fix the country” online protest.

Focusing on the campaign message, Winston Amoah, a Co-host of the Super Morning show, Joy FM expressed that, the “Fix the country” campaigned message was set right and got everyone talking and sharing opinions about it however, the organizers failed with the attribution of message.

He said, “they set the main agenda, “fix the country” but the attribute of the message is lost. Government cannot do everything overnight and so the people should be able to tell or share what they want the government to fix because failure to share indicates that the people do not know what they want. 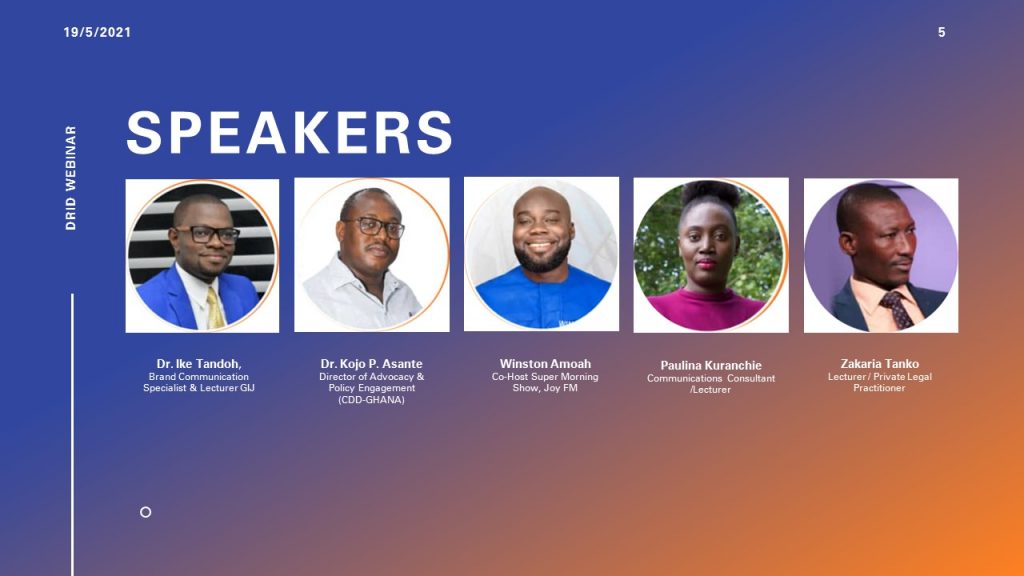 Winston further demonstrated that, if the people for instance are requesting for constitutional reform, they should be able to tell it so government can start the processes of constitutional reform. “We all admit the country needs to be fixed and we should also admit that our physical space is in adequate and so we have to fix certain things and then the long-term fixing can be achieved”, he added.

Moving on, Dr. Kojo P. Asante, a Director of Advocacy and Policy Engagement stressed on how government fails to recognize and appreciate the role of the media in the society. He said, “the political class has taken media for granted, they do not appreciate them and for government, they have forgotten that without them, even government own program cannot get to the people”.

The way they mistreat media is just so unfortunate and it has been happening without this impunity being checked and persons involved are not being punished, almost being like it is condoned by the state, he disclosed.

From the legal and ethical perspective on this whole press freedom in Ghana, a Lecturer and Private legal practitioner, Zakaria Tanko Musah (Esq) highlighted on a point made earlier and affirmed that, it is high time government appreciated the role of journalist in the country as they serve as the eyes and ears for the people and oversee the functions and activities of the government of which it is the duty of every citizen to do so.

He further stated that, although the media have the right to operate freely, if they faulter in their delivery, they should be punished by law.

Then again, on the issue of Caleb Kudah, he expressed that, the work of journalists are being guided by the Ghana Journalism code of ethics of which referring to it, “a journalist must Obtains information, videos, data, photographs and illustrations only by honest, straightforward, fair and open means unless it’s of public interest”. This is why journalists or investigative journalists go undercover to bring certain information to light.

He queried rhetorically if Caleb would have gotten the information he was looking for if he used straightforward means and was the actions of Caleb in the interest of public? He responded “Yes, because there was an allegation that resource that belongs to the state is being allowed to go waste and something has to be done about it.” Furthermore, Mr. Tanko stated, “the national security cannot bypass the law even if they think Caleb was wrong. The national security has to adhere to the law and cannot hide behind national security and be perpetuating a lot of injustice or interfering with some right”.

Overall, the guest speakers for the program satiated the topics by some measures government could take in addressing the “fix the country” campaign without steering the emotions of the aggrieved citizens. Also, as a country, we have to implement judicial interpretations regarding public interest and what constitutes the national security.

The Director of DRID who served as the moderator for the forum, Dr. Etse Sikanku said, the discussion on the issues of the press freedom and citizen engagement were fundamental to the democratic ethos and it is high time as academic institution and the general public to ponder over such issues.

He also added that, accountability is central to our government process and so there is a need to assess not just the state of press freedom but also the opportunities networked process provide for the opportunities of endangering activism in the course of Covid-19 and modern technology.

This forum intended to provide a platform for scholarly discussion of current national happenings from a communication perspective and was framed from the recent arrests of Caleb Kudah and Zoe Abu-Baidoo, all of Citi FM by the national security officials, and the ongoing online campaign labeled as “fix the country” of which citizens are demanding accountability from the government.