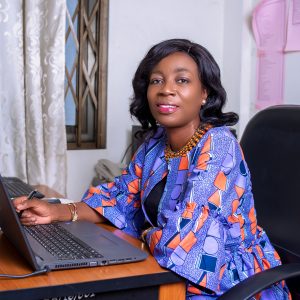 Mrs. Rhodalene Amartey is a Senior Lecturer at the Faculty of Public Relations, Advertising and Marketing at Ghana Institute of Journalism.

She joined the Ghana Institute of Journalism in 2007 as a Marketing Lecturer and was among the first batch of lecturers employed to augment the staff strength of the faculty after the Institute was granted a presidential charter in 2006.

Mrs. Amartey has consistently taught Marketing and Advertising courses at both degree and diploma levels coupled with teaching during short courses organized by the Institute. She has also supervised project work at all levels (diploma, degree and masters’ levels). She is also a seasoned researcher with interest in Branding & Customer Serivce.

Mrs. Amartey has served on several committees including the Governing Council which is the highest decision-making body (2014-2016). Examples of such committees are Appointments and Promotion Committee, Entity Tender Committee, Review of the Act Committee and GIJ Welfare Committee just to mention a few.

Mrs. Rhodalene Amartey holds a Bachelor of Arts Degree in Sociology, and a Master’s Degree in Business Administration (Marketing Option) both from the University of Ghana, Legon. She also has a professional qualification in Marketing from the Chartered Institute of Marketing, U.K. Currently, she is pursuing a Doctorate Degree (PhD) in Business Administration at the Accra Institute of Technology, a private university affiliated with the Open University in Malaysia.

Her amicable nature makes her relate well with all – superiors, colleagues, subordinates and students alike. In spite of her calm nature, she is highly principled, fair and firm. Her work output is very high and has a high sense of duty and responsibility. In simple terms, she gets things done. She is an ardent charismatic Christian and a Deaconess in charge of Women at the Revival Outreach Church – La Branch. Her favourite food is fufu with goat light soup. She is married with three children.