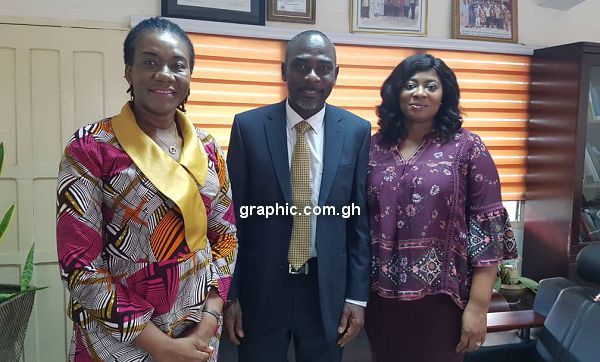 The Ghana Institute of Journalism (GIJ) and the National Population Council (NPC) are collaborating to develop a course module on population reporting for students in the school.

The programme, which will be piloted in the 2019/2020 academic year, according to the Rector of the school, Professor Kwamena Kwansah-Aidoo, is aimed at equipping students to better understand population dynamics and how it affects development.

He gave the hint when he paid a courtesy call on the Executive Director of the National Population Council, Dr Leticia Adelaide Appiah at her office in Accra on Thursday, January 31, 2019.

Prof. Kwansah-Aidoo was accompanied by the Head of Research and Acting Head of the Department of Communication at the school, Dr Lawrencia Agyepong.

He said the visit was to enable him to familiarise himself with sister state institutions and to find out how best they (institutions) can collaborate to contribute to the development of the country.

According to Prof. Kwansah-Aidoo, the familiarization tour also forms part of activities to create public awareness about the school’s upcoming 60th anniversary.

The school was established in 1959 by the Kwame Nkrumah government to provide training in journalism toward the development of a patriotic cadre of journalists to play an active role in the emancipation of the African continent.

For her part, Dr Agyepong, said “We want to link what we do to development of the country”, pointing out that GIJ as an institution does not only train communicators, but contributes to national development.

She commended NPC for instituting media award scheme to whip-up the interest of journalists in population reporting.

According to her, the award scheme will help promote understanding of population issues among the populace.

Touching on the course, Dr Agyepong said the course will be piloted in 2019/2020 academic year either at level 300 or 400, saying “we cannot leave population to chance.”

The Executive Director of the NPC, Dr Leticia Adelaide Appiah, expressed optimism that the collaboration between the two institutions would greatly contribute to the development of the country.

“It is important that we work together for the content our media people put out so that policy makers and stakeholders would well appreciate the impacts of population on national development,” she stated.

She expressed her happiness about the decision of the school to introduce a course on population reporting, noting that “I am excited that you have come on board. If we do not sow in season, we cannot reap the expected outcome.”

“Population is everything,” she said, adding that the decision by GIJ to introduce a course will help journalists and media practitioner to have better understanding of population issues and how to report on such issues with clarity.

She also expressed worry about lack of synchronization among state institutions, pointing out that such a practice leaves a lot to be desired.

According to her, it would be better if state institutions and agencies work together in the discharge of their duties, saying “We need to work together. We cannot sit in our silos.”